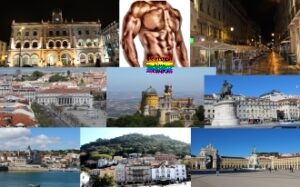 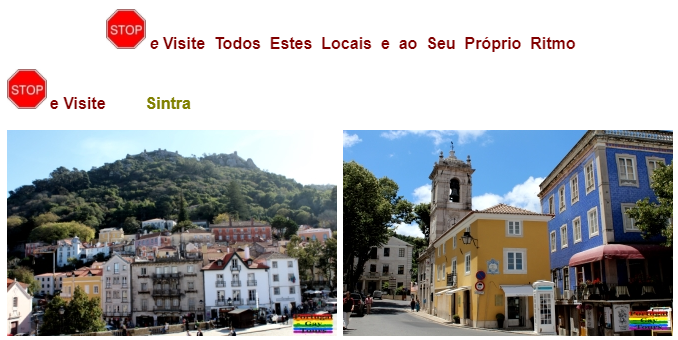 UNESCO approved the classification of Sintra as a World Heritage Site, under the category “Cultural Landscape” on December 6, 1995. Because of the exceptional value of the vast area that begins in the historic center of Vila de Sintra, going up to the Parque da Pena, passing by Santa Maria do Arrabalde and the Castelo dos Mouros, the Parque de Monserrate, and then descending to the town of Colares, this international distinction was awarded.
Special reference should be made to the Palácio Nacional da Vila and the Palacio da Pena, Palacio de Monserrate and Seteais, Quinta da Regaleira and Santa Cruz dos Capuchos. Sintra, in the 19th century, had a considerable influence on the development of Romantic Architecture throughout Europe .
Worth Appreciating, the Palaces, Everything As Beautiful and Rich of Artistic and Cultural Interest It closes.

The colorful village of Cascais, with its mansions and beautiful views of the sea, has been inhabited since ancient times.
It is thought that the name Cascais comes from the word “Cascas”, which means shells, probably referring to a number of empty sea shells found there.
It was in Cascais in 1560 that the Duke of Alba, under the orders of King Philip II of Spain, disembarked to conquer Portugal..

Dates from 1496 the request made by King Dº Manuel I to the Holy See, to erect a Great Monastery at the entrance of Lisbon, near the banks of the Tagus, in 1501 work began and approximately a century later, the works were completed.
D. Manuel I and his descendants were buried in marble tombs placed in the main chapel of the Church, the dedication of the Monastery to the Virgin of Belém was another factor that weighed on the royal decision. The building has an extensive façade of more than three hundred meters, obeying a principle of horizontality that gives it a calm and restful physiognomy. Manuel I chose the Monks of the Order of Sº Jerónimo, whose functions, among others, were to pray for the king’s soul and provide spiritual assistance to navigators who set out to discover new worlds.
It was declared a National Monument in 1907 and in 1984 UNESCO classified it as “Cultural Heritage of all Humanity”.

The Tower of Belém represents a whole national feeling, it is a work of art, a historical landmark, pattern and synthesis of maritime epics, the glory and the delivery of a people, with all the its decorative richness, which in words can only be portrayed faintly, Torre and Baluarte de S. Vicente, as it was also formerly called. It retains a dominating evocative power, recalling those times when they passed through there, greeting it from the ships and caravels, the heroes who ran without hesitation to meet dangers, thinking, only in Greater Portugal.
It was considered a World Heritage Site by UNESCO

Padrão dos Descobrimentos, a work of Nationalist sculpture, created in 1960 during the Salazar regime, to commemorate the 5th Centenary of the Death of Prince Henry, the Navigator, is shaped like the bow of a boat entering the water, the first statue being that of Prince Henrique holding a caravel in his hand, followed by various characters, such as the poet Luís de Camões, among others.

Lisbon Cidade das Sete Colinas Cidade Branca, Mother of Navigators and Explorers of the Seven Seas, Diamond Embedded in the Bank of a River.
Remains of human occupation in Lisbon dating from 5,000 to 10,000 Thousand Years BC have been found.
Lisbon was the capital of the kingdom in 1255, between the 13th and 14th centuries it asserts itself as the main trading post between the Mediterranean and Northern Europe, in one of its neighborhoods the first Portuguese University was created in the 13th century.

It was from Lisbon that in the 15th century the Portuguese set out to discover new lands, and even today, Lisbon is a city open to the known world and the unknown. The 17th and 18th centuries were marked by a continuous effort to rebuild Lisbon, the city’s most important construction campaign, taking place right after the Earthquake of 1 November 1755 that destroyed 10,000 buildings and killed more than 15,000 people. the first Illuminist City in the World, Lisbon, was designed.
Tour in Baixa Pombalina

The main benefits of the Sauna
Decrease tension in muscles, therapy can help you to overcome an amount of stress, health related problems including insomnia, fatigue, etc…etc
Massage also reduces stiffness in muscles, which can help you continue your visit to Portugal, Lisbon.

Bairro Alto, a typical Lisbon area with narrow cobbled streets, centuries-old houses and small traditional shops, is one of the most picturesque in the city. Since the 80’s, it has been the best known area of Lisbon’s nightlife, with numerous bars and restaurants along with fado houses,
In the last 20 years it has acquired a very unique and characteristic life, where different generations intersect in the search for nighttime entertainment. Bairro Alto is known for its Gay and Gay Friendly atmosphere, also known for its gay bars.

Legal Info:
Pick-up and Drop-off at your Hotel or at any place you wish.
Private Tours for You, Friends or Family.
Price Includes: Car or Van, Non-Smoking with Air Conditioning (No Logos)
Sightseeing, Transfers and Others,
Driver/Tour Leader Gay: who explains the entire route to you
Languages ​​Spoken: Portuguese – English – Spanish.
Entrances to Monuments and Meals Not Included.